Amazon Was More Investor than Retailer in the First Quarter

April 30, 2012
Amazon.com is the world’s largest online retailer, but its outside investments contributed more money to the company’s bottom line in the first quarter than its e-commerce operations. 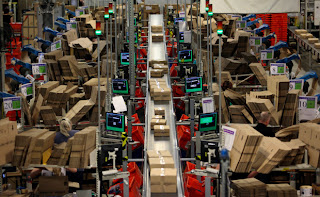 In the three months ended March 31, Amazon made more than half its $130 million in net income from something called equity-method investments, which give the company “the ability to exercise significant influence, but not control, over an investee,” according to a filing with the Securities and Exchange Commission.
That may mean the company’s investing savvy is improving — the $89 million Amazon attributed to equity-method stakes is the most it’s reaped in at least three years. Quarterly results from those investments have ranged from a loss of $17 million to a gain of $18 million since the beginning of 2009, data compiled by Bloomberg show.
The company only discloses one investment included in that group — its 29 percent stake in LivingSocial.com, the second-largest daily deal site. LivingSocial reported more net income than Amazon in the first quarter at $156 million, up from a $60 million loss in the year-ago period.