April 30, 2012
President Obama's counter-terrorism adviser has given the most detailed explanation so far of America's use of drones to kill members of al-Qaeda.
In a speech to a Washington think tank, John Brennan said the strikes were helping to win the war on the militant network.
President Barack Obama wanted to be more open about the practice, Mr Brennan added.
The comments come in the week marking a year since Osama Bin Laden's death.
BBC Washington correspondent Paul Adams says this is not the first time the Obama administration has confirmed the use of drone strikes. 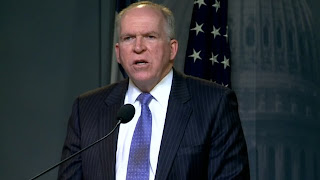 'Disaster after disaster' In January, the president did it himself, during a webchat. But our correspondent says Mr Brennan has gone further than anyone so far in laying out the rationale for a policy that remains controversial.

Analysis Mark Mardell North America editor
It is hardly surprising that President Obama wants to use Bin Laden's death as a symbol. It may not be the only success of his administration. But it is the only one unadulterated by party politics.
The only one that was celebrated by just about every American, of every political persuasion. It was greeted with glee by some of those who might usually see Mr Obama as weak on national security.
When some worry that he is a consensus-seeker, a ditherer, this version of the president is a gutsy risk taker. The crudeness of the presidential pitch may put some off, but any row that is created only serves to highlight that Bin Laden was indeed killed on Mr Obama's orders.

Mr Brennan said unmanned drone strikes were legal, ethical, necessary and proportional, overseen with what he called extraordinary care and thoughtfulness, especially when the target was an American citizen.
In his speech at the Woodrow Wilson International Center, he said al-Qaeda was losing badly.
For the first time since America's war on the organisation began, Mr Brennan said it was possible to envision a world in which the core of al-Qaeda was no longer relevant.
He added that drone strikes usually took place with the co-operation of the host government, in "full accordance with the law".
Such strikes are thought to have killed hundreds of militants in Afghanistan, Pakistan and Yemen.
But Mr Brennan also conceded that there had been civilian deaths as a result of some strikes.
Pakistan has previously demanded an end to US drone strikes on Pakistani soil.
Mr Brennan also said that documents found at the compound where Osama Bin Laden was killed in Pakistan last year would go online later this week. 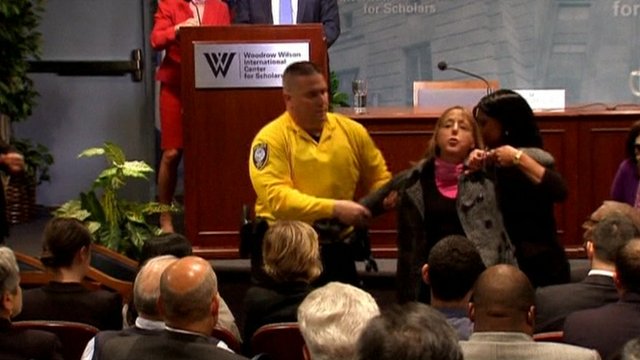 A protester disrupted the speech and was dragged away by a security guard
They were gathered by US Navy Seals during the raid on Bin Laden's hideout in Abbottabad on 2 May 2011.
The papers are said to include communication between Bin Laden and his associates, and his hand-written diary.
They are said to reveal that Bin Laden had considered changing al-Qaeda's name because so many of the group's senior operatives had been killed.
"In short, al-Qaeda is losing badly. And Bin Laden knew it. In documents we seized, he confessed to 'disaster after disaster'," Mr Brennan said, reports AFP news agency.
"With its most skilled and experienced commanders being lost so quickly, al-Qaeda has had trouble replacing them."
Mr Brennan said the documents would be put online by the US Military Academy's Combating Terrorism Center.