April 29, 2012
Delhi election results so far : BJP looks to be in leading position in all  the three newly-formed municipal corporations of Delhi. As of now 80 results are announced in which BJP has bagged a total of 49 of 272 wards in all the three corporations while Congress has won 19 seats. 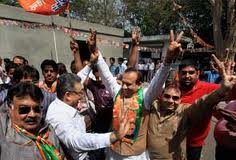 Eight Independents have also won, BSP 2 besides one each by JD(U) and INLD.
As per the trends available, BJP is leading in 130 wards out of the total 272 wards while Congress is ahead in 80 seats. Others, including BSP, is ahead 54 seats.
South Delhi Corporation :
East Delhi Corporation :