In Vast Jungle, U.S. Troops Aid in Search for Kony

April 30, 2012
OBO, Central African Republic — It has got to be one of the oddest matchups in United States military history. 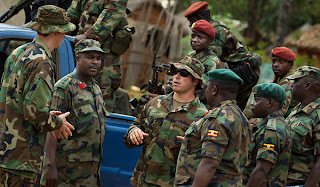 One hundred of America’s elite Special Operations troops, aided by night vision scopes and satellite imagery, are helping African forces find a wig-wearing, gibberish-speaking fugitive rebel commander named Joseph Konywho has been hiding out in the jungle for years with a band of child soldiers and a harem of dozens of child brides.
No one knows exactly where Mr. Kony is, but here in Obo, at a remote forward operating post in the Central African Republic, Green Berets pore over maps and interview villagers, hopeful for a clue.
Their biggest challenge, they say, is Mr. Kony’s turf, a vast expanse the size of California in the middle of Africa that is so rugged it renders much of the American gadgetry useless. Picture towering trees that blot out the sun, endless miles of elephant grass, and swirling brown rivers that coil like intestines and are infested with crocodiles; one of them recently ate a Ugandan member of the force.
“This is not going to be an easy slog,” said Ken Wright, a Navy SEAL captain and the commander of the joint American detachment assisting in the Kony hunt.
Still, in the past several months since they arrived, the Americans say Mr. Kony’s army of around 300 fighters is showing cracks. No longer is Mr. Kony able to direct the massacres he directed just a few years ago when his fighters waylaid entire towns and hacked hundreds of people to death. His armed acolytes are breaking up into small, desperate groups, American officials say, and for the first time they are abandoning many of the women and children they had abducted who cannot keep up as they flee deeper into the bush.
The Americans emphasize that they have no interest in participating in actual combat — “This is strictly an advise and assist role,” Captain Wright said, meant to strengthen the capabilities of African troops. Their deployment is emblematic of the Pentagon’s new military strategy for Africa, unfurled earlier this year, in which Pentagon officials say they will develop “innovative, low-cost, and small-footprint approaches to achieve our security objectives on the African continent.”
Already, American-paid contractors and intelligence agents are working quietly in Somalia. And small groups of American advisers have been training African armies for years, though it is not always clear how well this turns out. Just a few weeks ago, Mali’s democratic government was ousted in a coup led by none other than an American-trained army captain.
Yet no other American military project in sub-Saharan Africa has generated the attention — and the high expectations — as the pursuit of Mr. Kony, partly thanks to a wildly popular video on Mr. Kony’s notorious elusiveness and brutality, “Kony 2012,” that set YouTube records with tens of millions of hits in a matter of days. Gen. Carter F. Ham, the overall commander of American forces in Africa, has a “Kony 2012” poster tacked to his office door. As one American official put it: “Let’s be honest, there was some constituent pressure here. Did ‘Kony 2012’ have something to do with this? Absolutely.”
Mr. Kony started out in a northern Uganda village more than 25 years ago as a Catholic altar boy who spoke in tongues. People said he was a prophet. He went on to form a rebel force, the Lord’s Resistance Army, bent on overthrowing Uganda’s government and ruling the country with the Ten Commandments. Soon enough, though, Mr. Kony was breaking every one.
His fighters mowed down impoverished villagers, sawed off lips, and kidnapped thousands of children, brainwashing them for use as tiny killing machines. Mr. Kony often donned wigs and costumes, saying he was possessed by spirits including one named, “Who Are You?” In 2006, Ugandan troops pushed Mr. Kony out of Uganda into the lawless borderlands where the Democratic Republic of Congo, the Central African Republic and what is now South Sudan meet.
By this point, Uganda had become one of America’s closest African allies, and when the United States was deeply worried about Somalia’s becoming a terrorist sanctuary, Uganda was the first country to step forward with peacekeepers, scoring major Pentagon points.
In December 2008, the new American military command for Africa, known by the acronym Africom, helped plan an attack on Mr. Kony’s camp in Congo, dispatching a team of military advisers to Uganda. But Mr. Kony escaped before the Ugandan helicopter gunships even took off — apparently he had been tipped off. Worse, his army slaughtered hundreds of nearby villagers in revenge, leaving behind scorched huts and crushed skulls.
The American government continued running a semicovert logistics and intelligence operation to extend the Ugandan army’s reach so it could chase Mr. Kony across the region. The United States has also pumped in more than $500 million in development aid to northern Uganda, turning a former battlefield into a vibrant piece of the Ugandan economy with new banks and hotels.
But many Americans, including the advocacy group Invisible Children, which produced the Kony2012 video, wanted more. They pressured Congress to pass the Lord’s Resistance Army Disarmament and Northern Uganda Recovery Act in 2010, which paved the way for President Obama to send in the special forces late last year.
One Army Green Beret officer based in Obo — Captain Greg, who under ground rules with visiting reporters did not give his last name — said Sunday that he had spent the bulk of his time reviewing intelligence reports with Ugandan and Central African counterparts in an old brick house called the fusion center.