CME Group Inc will extend trading hours for its hallmark grain contracts, two sources close to the matter said on Monday, as the Chicago exchange moves to defend its turf against rival ICE's bid for nearly round-the-clock transactions.
The board of the CME, which has a stranglehold on grains trading through the Chicago Board of Trade, the world's largest grain exchange that it acquired in 2007, has agreed to extend trading hours, but has not decided on how many hours to add to its trading day or when to implement them, the sources said.
Chicago traders had earlier cited widespread talk that the CME was planning to extend the trading day to 22 hours, matching the trading period unveiled several weeks ago by the Atlanta-based IntercontinentalExchange as it announced plans to launch look-alike grains contracts. 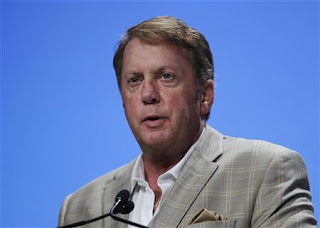 Currently CME grains trade a 13-hour stretch overnight and nearly four hours during the day.
The shift to a nearly continuous cycle would be the latest step-change for the tradition-bound Chicago institution, which has struggled to balance demands from new hedge funds and institutional investors against the floor traders, farmers and other smaller dealers who have been wary of change.
"I don't think this is about either exchange caring about how long peoples' trading days are. This is about competition and holding market share and maximizing return to shareholders," said Rich Feltes, vice president for research with futures merchant R.J. O'Brien.
A source said the extended trading hours could possibly go into effect after May 23, which marks the end of a five-year period during which five people, including three CBOT directors, had veto rights over rule changes at the exchange.
The group was given the veto power in 2007 as part of revised terms for the CME-CBOT merger agreement to provide additional value to all CBOT Holdings shareholders.
Traders cited a widespread rumor that the CME was planning for grains to be traded from 6 p.m. CDT (2300 GMT) to 4 p.m. CDT (2100 GMT) -- allowing for the exchange to be open during times when price-sensitive data is released from the U.S. Department of Agriculture.
The Chicago Board of Trade has been the unchallenged global benchmark for grains prices from Paris to Sydney to Singapore, extending its trading hours in the past to allow traders in Asia and Europe to participate and expand its business.
But ICE is now encroaching, offering contracts that will trade from 8 p.m. to 6 p.m. Eastern Time (2400-2200 GMT).
"The board has approved to extend trading hours," one source said. The sources said a plan by ICE to launch look-alike corn, wheat and soybean contracts was a key reason behind the move.
Asked to comment on the apparent board decision, a CME spokesman referred to an earlier comment: "At CME Group, we regularly engage with industry participants to discuss ways to enhance our markets. We will keep our customers and industry participants abreast of any planned changes, but have nothing formal to announce at this time."
LARGE SPECULATORS COULD BENEFIT
Expanded trading hours could give an extra advantage to large, speculative traders who have instant access to USDA data and the available capital to immediately trade on it, said Alan Brugler, president of Brugler Marketing & Management.
Until now, almost all major U.S. agricultural data -- including weekly crop progress reports issued on Monday afternoon, weekly export sales numbers on Thursday morning, and monthly supply-demand reports -- have been released outside of current CBOT trading hours.
An analyst, who declined to be named, said the CME had not intended to expand its trading hours -- until the ICE challenge -- because there was not demand from customers. "The commercial crowd has never really been in favor of that because they would have to put on extra coverage in case something happens.
'I WISH THE MARKET WAS OPEN NOW'
"Also, how many afternoons have we seen any market-moving news that had people saying 'I wish the market was open now'," the analyst said, adding that monthly USDA livestock reports hardly ever affect the grains markets.
CBOT grain futures currently trade electronically on the exchange's Globex platform from 6 p.m. to 7:15 a.m. Central time, while side-by-side trade on Globex and the open-outcry pits runs from 9:30 a.m. to 1:15 p.m.
CME Group last widened its trading hours in grains in 2009, expanding the early Globex session to 7:15 a.m., from 6 a.m. previously. The CME's New York Mercantile Exchange (NYMEX) already trades nearly around-the-clock.
Grain analysts said the launch of the ICE contracts would pressure CME to either match its trading hours, or risk losing business when market-moving news occurs outside of CME's trading schedule.
The weekly U.S. crop progress updates, which are released at 3 p.m. Central time on Mondays between April and November, can often impact the grain markets when CME electronic trade resumes three hours later.
"Especially when we get into (crop) ratings and we are hanging on every percentage change in the ratings on a weekly basis -- I question whether the CME is going to remain closed and let ICE drain off all that volume," said Feltes.