US consumer spending rises 0.3% in March

April 30, 2012
Americans increased their spending by 0.3% in March in a sign of the continuing recovery for the US economy.
The rise, revealed in a Commerce Department report, also showed that personal incomes rose 0.4%.
Economists closely watch consumer confidence and spending patterns because their spending accounts for 70% of economic activity in the US. 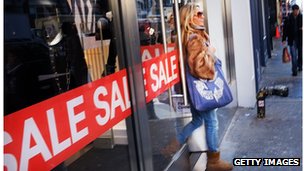 Last week, figures showed that US economic growth slowed in the first quarter of the year.
'Healthy trend' The spending and income data released by the US Commerce Department was more encouraging.
Falling unemployment and relatively warm weather appear to have boosted spending this year.
January to March was the warmest first quarter the US has experienced since 1895, according to the National Oceanic and Atmospheric Administration.
That encouraged Americans to dine out and go shopping, economists say.
Spending for February was revised from an increase of 0.8% to 0.9%.
"The trend is good from the perspective that incomes are outpacing spending, so we don't see consumers dipping into savings as much," said Kathy Lien, head of research at GFT Forex.
"Of course, markets like increased spending, but in this situation it's a healthy trend in terms of reducing household debt levels," she said.
The big event for economists this week comes on Friday, with the release of the jobs report for April.
Meanwhile, separate data published on Monday pointed to a slowdown in industrial activity in the US Midwest region.
The Chicago Purchasing Managers Index - which is based on a monthly survey of large businesses in and around the major US city - fell to 56.2 in April, its lowest level in 29 months.
Although the index level indicated that the region's economy was still expanding - as does any reading above 50 - it was much lower than the 61 level expected by economists.